What is a Hosted Phone System, and How Does it Work?

In this article, we’ll cover everything you need to know about VoIP phone systems and their benefits for business. 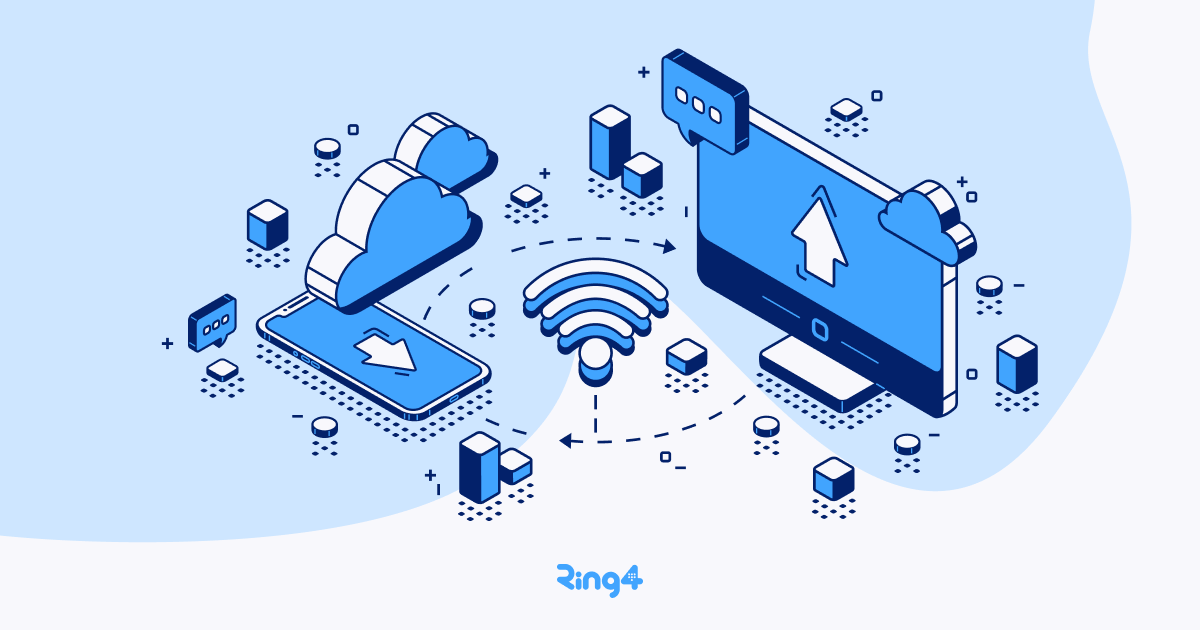 What is a Hosted Phone System?

Hosted phone systems, also known as Cloud PBX, run on a wireless internet connection instead of a traditional phone line. They are hosted by third-party providers and offered to businesses as a service. In return for access to a personalized phone number, business owners pay a monthly fee to the VoIP company.

Hosted phone systems were introduced by the company VocalTec. There were several developments in internet voice calling technology in the years leading up to its release, but the company was the first to make it available to the public. VocalTec released the first internet phone in 1995. The invention was intended to provide a cheap solution to long-distance calls. However, it was soon picked up by businesses when the benefits became apparent.

The main difference between a hosted and a traditional phone system is how they transmit data. Hosted phone services send voice data over the internet instead of a physical wire.

VoIP phone systems are not limited to just cell phones. They enable any device to make and receive voice phone calls, from laptops to tablets. This makes cloud-based solutions attractive, as no specialized equipment is necessary.

The experience of a call on a traditional phone vs. a cloud-hosted solution is virtually the same. The only difference is the process of connecting the call.

How Does a Hosted Phone System Work?

A hosted phone system is connected to a Private Branch Exchange (PBX). The phone provider manages the data on a private server offsite.

Here is a rough idea of how a typical flow for businesses that use a cloud PBX-hosted phone system for incoming calls might look:

Hosted phone systems make it possible to initiate and receive calls with an internet connection alone. There are several additional features business owners can take advantage of while on contract with a hosted phone system provider.

Along with phone calls, most modern-day businesses use text messaging to market their services and communicate with current customers. VoIP service providers have adapted to this, offering versatile text messaging features.

Call forwarding is an important feature to leverage as a business, especially as your organization grows. When a staff member is away from their desk or out of the office, calls should be forwarded to another relevant department instead of dropped. Many businesses purchase additional call forwarding services, but this is not necessary with a hosted phone system.

VoIP phone services are equipped with voice recording technology. This is incredibly convenient for businesses when the need arises to record important meetings or track customer satisfaction. Again, there’s no need to purchase a separate device or service.

Businesses can set up a voicemail box for their VoIP lines as well. This way, no important calls are missed.

For many hosted phone system providers, in addition to the basic features, such as messaging, forwarding, and recording, cloud-based phone systems present the opportunity for app integrations. Platforms like Slack can often be set up and connected to the VoIP plan for more convenient communication.

Hosted phone systems benefit businesses in many ways. First, they are a flexible solution for teams of all shapes and sizes. Remote employees and communication on the go are made possible by internet-based phone lines.

VoIP phone systems are also scalable. Team members between branch locations can communicate internally and externally from almost anywhere. The management of growing teams is made easy by cloud-based solutions.

Finally, hosted phone systems are extremely cost-effective. The monthly fees amount to a fraction of what it costs to install and maintain a traditional phone system.

On top of that, no additional equipment is needed when you use most service providers. Any existing devices, from cell phones to laptops, can be used to access the private phone line. Most businesses already use wireless internet, providing them with seamless integration and, as a result, no added costs.

We’d be remiss if we didn’t share that hosted phone systems do sometimes come with a few drawbacks. Although hosted phone systems provide many conveniences to business owners and staff, there are a few important things you should be aware of. Since they are hosted by a third-party company, privacy can be a concern if you’re not using a good hosted phone system service provider. The level of security will vary between providers and is something to keep in mind when searching for the right company.

Another important disadvantage to keep in mind with cloud-based phone systems is the dependence on internet connectivity. If the WiFi goes out temporarily or the connection is spotty, it can stop everything from calls to instant messages. This may lead to miscommunication between team members or decreased customer satisfaction, so it’s important to choose the best service provider. However, if the WiFi drops, in many cases, if you’re using a smart device to make calls, you could temporarily switch to your cell phone’s data plan to keep things moving in your business as usual until the internet is restored.

Who Needs a Hosted Phone System?

Businesses of all sizes can take advantage of hosted phone systems. They are a cost-effective way to manage large teams and customer bases with existing devices. There is no longer a need to pay for expensive installations and monthly phone bills. Instead, business owners can control the way they communicate from the palm of their hands!

Ashley Grant is a content creator currently based in Richmond, Ky. Ashley grew up in Tampa, and attended the University of South Florida. Go Bulls! When she isn’t writing and or hosting her Bloggy Friends Show podcast, she loves trying new foods and beverages, exploring the city she lives in, and traveling as much as possible. In addition to ghostwriting for several small businesses and freelance writing under her own name for a variety of websites, she blogs about her lifestyle, working from home, and much more at FamousAshleyGrant.

What is a Cloud-Based Phone System, and How Does it Work?

Here are the key features and comparisons to help you choose the right kind of phone system for your business, whether cloud based or something else.

What is the History of VoIP, and How Did the VoIP Industry Grow?

Know the history of VoIP, how the technology has developed from the day of its invention to the present day, and the challenges it has overcome.